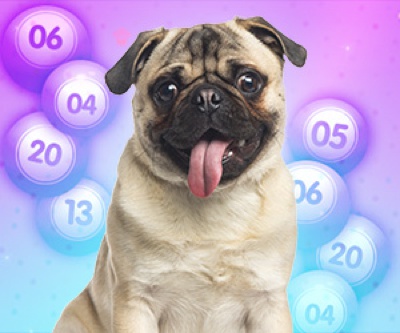 Spend some time looking around the world of gambling and it won’t take long to realise that there is a fair degree of crossover between companies. It is simultaneously an industry that even the most disreputable of people an get involved in and yet there are a limited number of truly excellent and reliable names you can trust. Vernons is a company that was best-known for offering football pools, along with Littlewoods.

Littlewoods was bought by Rodime Plc in 2000, with the company changing its name to Sportech. Seven years later and Sportech bought Vernons, merging the football pools companies together to form ‘The New Football Pool’. Why is all of that relevant? Because Vernons Bingo began life as Littlewoods Bingo then switched to its current form in 2012 – they same year that they took on Virtue Fusion software. We’ll tell you more about the confusing nature of the way the businesses all criss-cross with each other later, but for now we’ll stick with explaining about the Vernons brand as it currently is.

Fronted by a delightful looking pug named Stan, the company has gone for a bright and exciting looking website, suggestive of the fun you’ll have if you get involved with the games that they have on offer. There are also other areas of the site that you’ll be able to explore if you want to get more out of life than just bingo, with fixed-odds sportsbook also available. On this page we’ll tell you all about the company’s loyalty program, the various games that you’ll only be able to play with a Vernons account and the different banking options available to you as a member of Vernons Bingo. 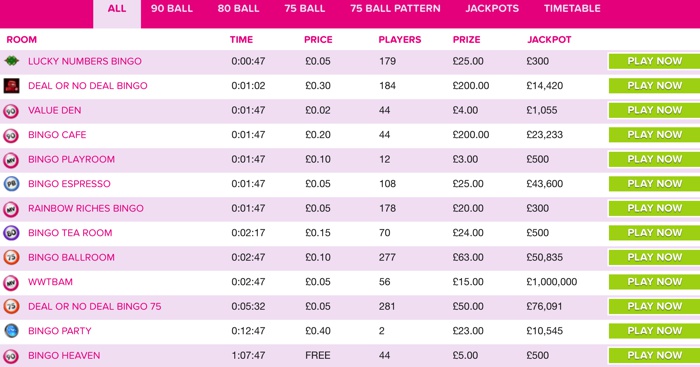 Because so many different companies use Virtue Fusion as their bingo software, the canny ones also have some games that are exclusive to them in order to encourage people to keep coming back. After all, some punters really enjoy loyalty schemes but plenty of others are far more likely to return to a site if they enjoy the games they play there. Here’s an indication of some of the exclusive bingo games that you’ll be able to play at Vernons Bingo:

Virtually all of the games that are exclusive to Vernons Bingo have the word ‘Bingo’ at the start of their title, which is helpful. Bingo Cafe is a 90 ball room that often has added features such as prizes for 1TG or 2TG. There’s also a decent progressive jackpot on offer.

Another 90 ball room, Bingo Heaven also has a good progressive jackpot that you’ll want to try to win when you’re in there.

If you know anything about coffee then you won’t be surprised to learn that this room is Vernons Bingo’s quick fire room. At the time of writing the progressive jackpot in here is the most impressive of any of the 90 ball rooms, standing at £40,000+. That gives you an indication of how much you can win if things go right!

One of few exclusive rooms without the word ‘Bingo’ in the title, this room is where you’ll want to head to if you fancy playing some cheap bingo. Games typically start at one pence in this 90 ball room.

To be entirely honest, you’re not going to see vast differences between the rooms when it comes to their style and the format that they adopt. The Bingo Ballroom is a 75 ball room with an impressive jackpot, but other than that there’s not much to set it apart from the others.

As with Bingo Ballroom, Bingo Party is a 75 ball room that doesn’t exactly go to town when it comes to the style used or the graphics you’ll encounter.

This room is used to host Newbie games and other exclusive events. It only comes to life moments before the games are due to begin, so head to the Specials section of the lobby just before 7.45pm every Tuesday if you’re a Newbie. You’ll find that the room is open until 10pm.

Playtech are a fairly all-encompassing company in terms of what sort of games they offer, so it’s no surprise to learn that they also install side games and slots for companies that use their Virtue Fusion software. Vernons Bingo has a decent selection of slots, arcade style games, scratch cards and jackpots available to punters that are exclusive to them. The hope being that, much like with the exclusive bingo games and loyalty scheme, it will encourage you to head back to the site regularly.

Weirdly, there’s no real way to know which games are exclusive to Vernons and which can be played on any Virtue Fusion site. If you’re a regular player of such side game then the chances are you’ll know which ones don’t look all that familiar and which ones aren’t all that common. There’s also a Casino tab that you’ll see when you’re on the Vernons Bingo page, filled with all of the usual combinations of slots and table games that you’d expect from an online casino. These can be played provided you have a Vernons account and some cash in your balance.

As well as a whole host of exciting games that are available all year round, you’ll also find that Vernons offer some games that are seasonal. The likes of Santa’s Cash Dash spring to mind, available only during the time of the year when it’s acceptable to talk about Father Christmas, sit around drinking port in the middle of the afternoon and have no real clue what day it is.

All of the top companies know that one of the best ways to keep customers happy is to have a number of banking options available to them. As far as Vernons is concerned, you’ll be able to get money into your account using Visa, MasterCard, Maestro, NeTeller, Skrill and PayPal, as well as less common methods such as PaySafeCards. All methods involve an immediate transfer of funds when you’re depositing into your account, though withdrawals take a little bit longer to go through.

When it comes to deposits, regardless of the method you choose you’ll be asked to pay a minimum of £5 into your account. In terms of withdrawals they actually ask you to withdraw a little bit more, with the minimum amount required for a withdrawal to go through being £10. Again, though, no matter which method you use for your deposits and your withdrawals you will not be charged any fees by Vernons. Do make sure that you check with your provider directly, however, as they may charge you fees that Vernons can’t do anything about.

Vernons as a company can trace their history all the way back to 1925, when the Vernons Football Pools was set up as a company to rival Littlewoods. It was bought by Ladbrokes in 1989, with the bookmaker then selling it to Sportech in 2007. In 2013, Sportech sold Vernons to a rival company called NetPlay, who already owned and operated both SuperCasino.com and jackpot247.com.

In March of 2017, NetPlay confirmed that the company had been acquired by the Betsson Group in a deal worth £26 million. Betsson itself can trace its roots back to 1963 and is one of the biggest gaming companies in Europe. As well as buying Net Entertainment in 1998, Betsson have employed a strategy of aggressive acquisitions over the years. At the time of writing, they also own the likes of Betsafe, Casino Euro and Nordic Bet.