Deal Or No Deal Bingo Review 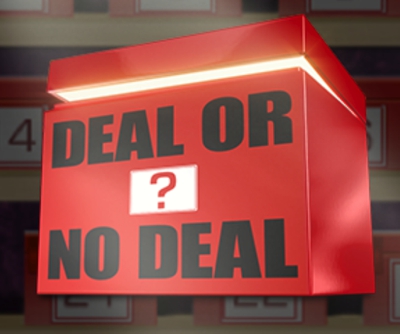 If you’ve played bingo online before then you’ll know that one of the most popular bingo games on the market is Deal Or No Deal. It makes sense, therefore, for some enterprising company our there to launch a bingo site dedicated to this most enjoyable of game variations. Of course, the company that owns the rights to Deal Or No Deal, Endemol, aren’t exactly going to let any random company open a website themed after their popular game and TV show, so it’s no surprise that the Deal Or No Deal bingo site is actually run by Endemol themselves.

Endemol Shine Group, a joint venture between Apollo Global Management and 21st Century Fox, was launched in 2015, though Endemol’s history as a solo company dates much further back than that. It was founded in 1994 by Joop van den Ende and John de Mol and has spent most of its existence producing entertainment shows for Big Brother. One such show was Deal Or No Deal, hosted by Noel Edmunds and popularised by Channel 4 in the UK. The Deal Or No Deal site is themed entirely around the gameshow, so lovers of it will recognise most of the rooms and themes in play. We’ll tel you more about that, as well as some other important details, on this page.

Deal Or No Deal might be one of the most popular games on the online bingo circuit, but you can’t dedicate every single room to the bingo game alone. Instead, Virtue Fusion have a series of rooms that the put in place from one bingo provider to another, with the major difference being the skin that surrounds it. Here’s a look at the different rooms you’ll encounter on the Deal Or No Deal website:

Named after part of the Deal Or No Deal television show, The Dream Factory is a 90 ball room where you can head to play fairly standard variations of the wonderful game that is bingo. This is the room that you’ll want to head to if you fancy playing inexpensive bingo, with games starting at 1p.

The Quick Fire Round is one of the Deal Or No Deal gameshows most fun moments, when contestants pick boxes in quick succession in order to get to the game’s conclusion quicker. It was a natural name for the room where bingo games happen at a speedy pace, with 90 ball games coming at you thick and fast.

We mentioned before that the rooms provided by Virtue Fusion are much of a muchness from one bingo provider to another and the Walk Of Wealth is a perfect example of what we’re talking about It’s nothing all that exciting, but 90 ball bingo games tend to happen later in the day than in some of the other rooms.

Another essentially generic bingo room, the Crazy Chair Room is an 80 ball bingo room that naturally offers something a little bit different to the 90 ball rooms you’ll have encountered elsewhere on the site.

Another room named after a saying that was popularised on the TV show, The Perfect Game is a 75 ball room that you’ll be able to head to in the middle of the afternoon for a quick game.

Another 75 ball room, the Banker’s Bingo room is themed around the idea of playing against the banker. There’s nothing all that much to tell you about this room, except to say that if you like cheap 75 ball bingo then this might be where you want to head – the room often has ‘Tuppence Bingo’, where tickets start at just 2p.

Virtue Fusion is one of the best bingo software providers in the business, so it’s little wonder that so many companies use their services to ensure that their bingo offering is as competitive as it’s possible to be. The problem is that a large majority of websites then end up with the same types of bingo rooms filling up their space, so how do they attract return customers? One of the ways is by having a loyalty program, but we’ve already told you that that’s not something offered by the Deal Or No Deal site at the moment. Instead they have a large number of side games that will interest players who sometimes like to try something a little bit different to the bingo. There are countless ways that you can find these side games on the Deal Or No Deal website.

They are accessible from within the different bingo rooms on the site, for starters. You’ll see them separated into New, Featured, Top Games, Slots, Scratchcards and Numbers if you look for them here. Alternatively you can head back to the Bingo Lobby, where you’ll find access to them is split into just Top Games and any favourites that you’ve previously selected. The other option you’ve got is to head to the website’s homepage and then click on the ‘Games’ tab at the top of the page. From there you’ll find Quicklinks to slots, table games, scratchcards, mini games, a casino and one tab simply labelled ‘Deal Or No Deal’. Click on that last one and you’ll be presented with games that are purely themed around the eponymous TV show.

The interesting thing about the Deal Or No Deal website, when you consider that it’s one of the newest bingo sites around in terms of age, is how few banking options they give you. Instead of letting you use popular e-wallets like PayPal, NeTeller and Skrill, Deal Or No Deal limit you to more traditional options such as Visa, MasterCard and other debit cards. The main exception to this rule is the PaySafeCard, but even then you’ll struggle to be able to withdraw funds onto it. The most important thing you’ll want to know is that Deal Or No Deal themselves won’t charge you any fees for making any transactions.

Once you’ve opened your account, then, you’ll doubtless be keen to load some funds into it so you can get playing straight away. In order to do this you’ll have to deposit a minimum of £10. The maximum you’ll be able to deposit into your account is £1,000, although you’ll be allowed to do this five times in the space of twenty-four hours. Once you’ve been mega successful and picked up some decent winnings you’ll have the opportunity to withdraw your funds. The least Deal Or No Deal ask you to withdraw from your account is £20, with the maximum they’ll allow being £10,000. Once again, though, you’ll have the opportunity to do this five times in twenty-four hours, giving you a maximum possible withdrawal of £50,000 in the space of a day.

The truth of the matter is that there’s not much point telling you about the Deal Or No Deal site as it hasn’t really been up and running all that long and isn’t a company in its own right. You’ll know all about Virtue Fusion and Playtech by now too, so there’s not much point in telling you about them either. Instead, then, we’ll give you some information about Endemol, the parent company that owns the site and has owned Deal Or No Deal since it first went to air. We mentioned in the intro that it was formed by Joop van den Ende and John de Mol, who came up with the company’s name by putting their surnames together. Genius.

The Dutchmen were living and working in Amsterdam at the time, so that’s where the company has been based ever since. It was actually formed by merging production companies owned by the pair and really hit the big time when Big Brother became such a hugely popular TV show after it was first launched. Since then they have been behind some huge televisual hits, including the likes of Peaky Blinders, Black Mirror and an American show called Hell on Wheels. There’s no question that the TV show of Deal Or No Deal is also on that list, having been a hit around the world and spawning countless bingo games in its honour.