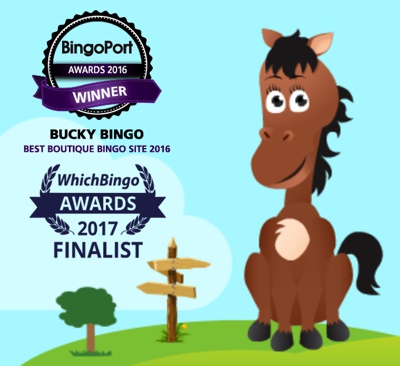 Bucky Bingo is another company on a list of companies that began life as a physical bingo hall. Set-up in the 1970s as Buckingham Bingo, it grew to become the largest bingo operator in the North-West. It was a genuine rival to even big names such as Gala and Mecca Bingo, though eventually the ravages of time limited how many people began to turn to bingo as a form of entertainment. Instead the majority of people began to look online for all of their bingo playing needs. As a result, the physical bingo halls were sold off and the online operation was bought by the bookmaker Betfred.

Betfred still owns Bucky Bingo, so you might well recognise the style and design of the website when you log on to use it. That doesn’t mean that you shouldn’t both with a Bucky Bingo account if you already play bingo via Betfred, of course. They’re run as entirely separate entities and the fact is that Betfred is a multi-faceted site. There you’ll find a sportsbook, casino and more alongside the bingo, whereas with Bucky the bingo takes centre stage. Here’ll you’ll learn what sort of games you’ll be able to play, whether or not there are any slots or the like and how the banking works. Firstly, though, a word about what you get if you’re a loyal customer.

Bucky Bingo might be owned by Betfred, but the site itself is still run on the Virtue Fusion network. Virtue Fusion tend to put most of the same bingo rooms on sites that they run, with the skin wrapping around them being the major difference from one site to another. As a result there’s a tendency for Virtue Fusion site to have some of their own exclusive games in order to help persuade punters come back to the site regularly. Here’s some information on Bucky’s private games:

A 90 ball bingo room that promises occasional expensive games, the Big Money room has a progressive jackpot that you’ll want to try to win when you play.

This is also a 90 ball bingo room and is where you’ll want to head if you don’t fancy spending the big bucks to play. Games here start at one pence, though the jackpot can grow to over £1,000 fairly regularly.

Most of the rooms on the Bucky Bingo site are much of a muchness, to be honest, but you’ll be able to play some free bingo in the BB’s Free room. It’s another 90 ball bingo room.

As the name suggests, this is an 80 ball bingo room and at the time of writing it’s got the largest progressive jackpot on the site. You could win over £50,000 if the balls come out right for you, giving you an indication of just what how large a prize you could win if you head to the room at the right time.

This is the only 75 ball bingo room on the site, though the jackpot can grow to a reasonably impressive size if it’s not won for a while.

It’s not just bingo rooms that Virtue Fusion’s parent company, Playtech, can install for the companies that use their software. They’re also well-known for producing exciting and captivating side games, with slots being the most common. Unlike some of the big names in bingo, Bucky Bingo doesn’t have a separate casino or sportsbook attached to it to house all of these games. Instead you’ll find them on a separate tab from right within the bingo lobby.

That tab is labelled ‘777 Games’ and offers exactly what you’d expect. There are a host of interesting games that you’ll want to have a look at and you can separate what you see according to certain conditions. Interested in the ‘New’ games on the site? Click on the ‘New’ tab. If you’d rather then you can view the company’s selected ‘Games of the Week’. Some people don’t like slots or the like and if you consider yourself in that category then you’re in luck; simply select the ‘Scratch Cards’ tab and you’ll be able to play some quick fire games instead.

You would be forgiven for expecting that a company linked to a major bookmaker like Betfred might have a large number of banking options available to them, but the reality is that Bucky Bingo actually keeps things rather neat and limited on that front. The usual debit card options are there, including MasterCard and Visa, as well as some of the more modern e-wallets that are growing in popularity. These include PayPal and PaySafeCards, though the likes of NeTeller and Skrill haven’t yet been added.

In terms of amounts of money you can move around, there’s a minimum deposit amount requested of £5. If you’re wondering, the largest amount you can deposit in one go is £1,000 and the most you can deposit during any 24-hour period is £5,000. The least you’ll be able to withdraw at one time is £10, whilst the most is £10,000. £10,000 is also the most you’ll be able to withdraw across the course of 24 hours. You will not be charged by Bucky Bingo for either a deposit or withdrawal regardless of the method chosen, yet you may be charged by your bank or financial provider, so do be aware of that.

Buckingham Bingo was the North-West of England’s biggest independent bingo chain until its buildings were sold in 2011. It was founded in 1970 by a man named Panico Panayi, who sold the company to Alchemy Partners in 2005. When the company was broken up and the clubs sold to both Club3000 and Castle Leisure, it was mainly because of the success of the Buckingham Bingo website that was first set-up in 2007. The last bingo hall under the Buckingham name closed its doors in 2010, with the company rebranding itself as Bucky Bingo the following year.

The online arm is an entirely different business to those bingo halls that were bought by Club3000 and Castle Leisure. The online bingo side of the business was bought by Betfred in 2011 and they continue to operate it to this day. The concentration has been on developing the reputation of the site, proudly proclaiming that it’s the top rated bingo site on the review website ‘Trust Pilot’. The link to Betfred can be seen in the way that the games are styled and the general feel of the website, though they’ve tried to do their best to listen to comments from users and ensure it’s a site that people enjoy playing on.